As leaders gather in Bonn for COP23 climate talks…

As leaders gather in Bonn, here’s what I want them to know:

The frequency and unpredictability of natural disasters is increasing. This year, the globe has seen its fill – hurricanes in Puerto Rico and Texas; mudslides in Sierra Leone, Colombia, and Democratic Republic of the Congo; earthquakes in Mexico; heavy rains in Zimbabwe and Sri Lanka; flooding in India, Bangladesh, and Nepal. We know from experience that the most important preparedness and response efforts when it comes to disasters lie in the efforts of the very communities most affected.

The is even more true when it comes to the ongoing impacts of climate change. With political and civil society leaders meeting in Bonn, Germany, to plan progress towards the goals set out in Paris Climate Agreement, we continue to see climate change damages unfold in an unprecedented manner. The Pacific island-nation of Fiiji is the chair of this year’s UN climate conference, and their leadership has made clear what many activists already know: that the drive for solutions to our warming planet are being led by the very communities that are most impacted.

In the midst of these important discussions, the CLIMA (Climate Leaders In Movement Action) Fund is excited to announce its first round of grant awards to 11 grassroots climate justice organizations operating around the world who are building local resilience – not only for when the most acute suffering or injustice occurs, but for a thriving future.

This first round, awarded over a summer filled with climate urgency, included rapid response support for environmental and women’s rights defender organizations around the world, who often themselves are facing bodily harm: Mazaska Talks received funding for indigenous leaders to continue work against the implementation of the Keystone XL Tar Sands Pipeline; Global Alliance for Incinerator Alternatives was awarded a small grant to support global members in their work to promote grassroots alternatives to incinerators, landfills, and other polluting practices; Southern Peasants Federation of Thailand received support for environmental activists protesting forest loss due to expansion of palm oil plantations in their home region; and Mother Nature Cambodia was awarded a grant to continue supporting defenders calling for an end to the practice of sand mining in western Cambodia. Members of the CLIMA Fund with Bertha Isabel Zuniga Cáceres of COPINH (third from left), daughter of slain activist Berta Cáceres, and Rogerio Honh of MAB (third from right) at the Environmental Grantmakers Association retreat in Grand Teton National Park in Wyoming in 2016.

Providing resources to human rights defenders is of critical importance to the climate justice movement, as we continue to see the horrific increase in threats and violence against people and communities placing their lives on the line for our planet and collective well-being. This support for security and capacity strengthening is a core element that cuts across all of GCSF’s grantmaking, including grants provided to social movement building organization such as the Civic Council of Popular and Indigenous Organizations of Honduras (COPINH) for its work uniting movements and defending indigenous rights; and to the Movement of People Affected by Dams (MAB) which organizes river-based communities and advocates for energy sovereignty across Brazil. June 19, 2017, Nigerian activist Nnimmo Bassey and Desmond D’Sa (in red, L to R) want to prevent the mining off Durban beachfront which among other thing is killing the fish. Picture: JACKIE CLAUSEN for Times LIVE http://bit.ly/2toXUO7

Long-term support, coupled with funding for emerging needs brought about in response new and harmful economic development projects, is also an important part of our climate justice strategy. Grants illustrating this type of funding were provided to organizations such as South Durban Community Environmental Alliance (SDCEA), which is partnering with Health of Mother Earth Foundation of Nigeria to elevate the voices of fisherfolk in the Fish Not Oil campaign. SDCEA also received a small grant to organize the People’s Economic Forum as an alternative to and awareness-raising gathering during the World Economic Forum (WEF) held in South Africa in May of 2017. 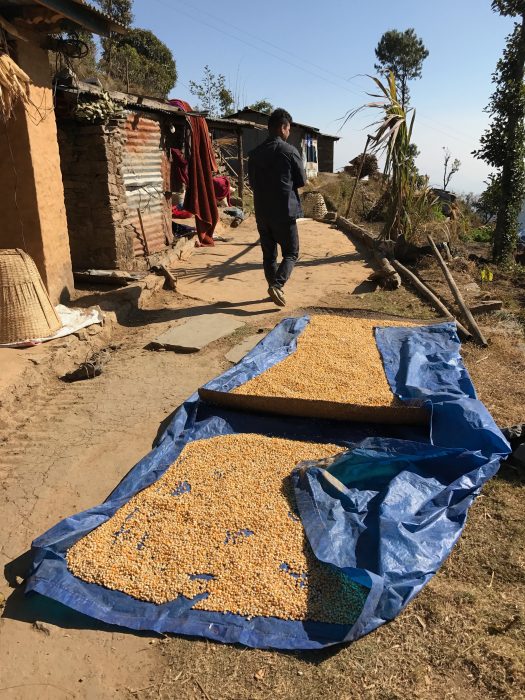 Drying seeds is one of many agroecological practices in use in Dhapsung, Nepal, supported by Diko Bigas Institute.

Funding and support was also provided for the Digo Bikas Institute for their Rethinking Development Program which will work to end fossil fuel use and promote a transtion to clean and just energy while emphasizing youth leadership; to Communities for Integrated Development of the Ch’orti Region (COMUNDICH) for its work to protect land rights and advance community management of natural resources in Guatemala; and to Forest Communities Association of Petén (ACOFOP) for a gathering of communities in Mexico and Guatemala impacted by hydropower development in the region.

The CLIMA Fund, launched in 2016 and formerly named the Grassroots Climate Solutions Fund, is a collaborative fund that seeks to strengthen, amplify, and unify climate justice solutions globally. Members Global Greengrants Fund, Grassroots International, Thousand Currents, and Urgent Action Fund for Women’s Human Rights are working together to offer a different approach to funding climate change strategies. The CLIMA Fund provides a continuity of multifaceted support – from emergency grants to multi-decade commitments – directly to grassroots organizations and social movements made up of those most impacted by climate change: Indigenous Peoples, small-scale farmers, Afro-descendent communities, women, and youth in the Global South.

The more local a solution is, the more effective, powerful, and impactful in the long term it will be. ~ Trishala Deb, Asia Program Director, Thousand Currents

The CLIMA Fund aims to raise and regrant a minimum of $10 million over the next five years to support organizations and communities tackling climate change with solutions that blend traditional knowledge with advocacy, movement and alliance building, storytelling, and inclusion in all levels of climate change decision-making.

Climate Justice, Global, SOLUTIONS, What We Do

Climate Justice, Global, What We Do

What Thousand Currents knows and does in the face of disaster

When defending the environment means risking your life