The highest authority in the Andean communities overseeing the Potato Park near Cusco, Peru, is not the government, a local leader, or any person for that matter. It’s a sacred mountain. However, the Potato Park is much more than ensuring that indigenous varieties of potatoes and other tubers continue to exist. The Potato Park is also an experiment in communities jointly building a mutual agreement to work together collectively using the “Ayllu” system to achieve Sumaq Causay (Buen Vivir). 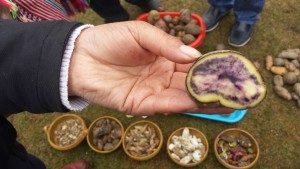 Within the Runa Ayllu, the Potato Park has organized themselves into various collectives, mostly economic collectives, which integrates members from the five communities: gastronomy, artisanship, medicinal plants, potato guardians and community promoters/technicians. In their joint agreement they also have a leadership council that integrates all the Presidents of the five communities. This integration of members from different communities is an experiment, as before the Potato Park existed, each community work individually, and there wasn’t much harmony or the ancestral practice of minca. Minca is a practice of reciprocity when one community member needs help, a person will bring another person with them to help that community member.

The Sallka Ayllu respects all the wild, which is respecting the flora and fauna of the Andes. In the 90s, government started to promote these communities to use improved types of potatoes, which many members planted. They realized that the yield was only high once and if they wanted to continue to use these potatoes, they would have to use pesticides. With the Sallka Ayllu system, that was out of the question.

Finally, with the Auki Ayllu, the norms set by the sacred mountain will determine how the ecosystem will survive and thrive. The mountain’s soil, its resilience against climate change, and its communication through the plants will let all human beings and all wild things live. All three ayllus depend on each other, which is the equilibrium and reciprocity of Buen Vivir.

The first time I visited the Potato Park was in December 2014, a time when Lima was hosting the COP20. I remember vividly when one of the Amaru community leaders from the Potato Park said,

We used to work based on what the Apus told us. [Apuses are the spirits of the sacred mountains that guard the communities.] We used to consult with the mountains, the plants and animals, but we’ve seen that the plans are confused. They are flowering when they’re not supposed to. We are losing confidence in what the plants are telling us. Climate change is still a worrying factor two years later. Walter, a community leader from Paru Paru shared that the Potato Park is considered to be a living lab, where indigenous members are trained to do investigation on their potatoes varieties. For the past five years, they’ve done research on 16 varieties of potatoes. What they found was that the conditions are no longer apt to grow potatoes up to an altitude of 4,500 meters. The Potato Park goes up to 4,600 meters, which means less territory is available for having the best conditions to grow potatoes.

In spite of these challenges, the Potato Park is not meant to be just a model of conservation management, nor is it a just a model of uplifting indigenous knowledge as science. It’s Buen Vivir in practice, where human development is moving forward together with Mother Earth.